skip to main | skip to sidebar
For and about Cancer Survivors in Second Life, and for anyone who has been touched by cancer

Three Relay For Life team captains were among the four contestants in The 1st Question on Tuesday. I couldn't be there myself because of the timing but I watched it later on line.

Aryon Dagger is a breast cancer survivor who has been featured before in these pages when she took part in the Makeover Magic program last year. She's a consultant for this year's program and talked about the fashion show which is taking place on Sunday.

The other contestants were Jasmine Night and Katina Magic who are both team captains, and Franja Russell who runs the SciFi and Fantasy portal and was last week's winner.

Pooky Amsterdam and Hydra Shaftoe host this weekly fun quiz on SLTV, and there were plenty of plugs for Makeover Magic and for Relay For Life.

First up, each contestant was asked to define which element defines them best. Aryon and Jasmine both chose mercury, which Aryon chose because it is 'liquid, smooth, and mixes well with other elements'. Katina and Franja chose oxygen and cobalt respectively.

It was a closely run contest between the two 'mercurial avatars' but Aryon slid in front at the end. Woot Aryon!

Watch it here on:

UPDATED Friday, June 5 - Aryon has blogged about her experience here:

Thank you for adding this to your blog. It was a great experience and a fun night. God knows I'll never forget that Robert E Lee was the WRONG answer *laughs hard*.

Well it was certainly a 'creative' answer! 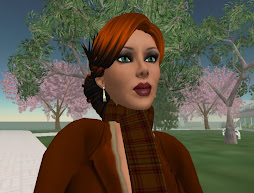 Poppy Zabelin
I am a volunteer program director for the American Cancer Society in Second Life and run the SL Cancer Survivors Group which meets in Hope Haven on the American Cancer Society island in SL. In real life I am a volunteer with several patient support organizations and write/edit patient information materials in cancer and other fields.